March 24, 2013- California officials have widened an investigation into the source of $11 million that was mysteriously funneled by a few nonprofit groups in 2012 to sway two ballot measures in the state, The Huffington Post has learned.

The state’s election watchdog agency, the Fair Political Practices Commission, which launched the inquiry last November, is working closely with the California attorney general’s office, according to a person familiar with the matter. They have issued about a dozen new subpoenas to individuals and organizations for financial records, according to the person, who requested anonymity because he was not authorized to speak publicly about the probe. 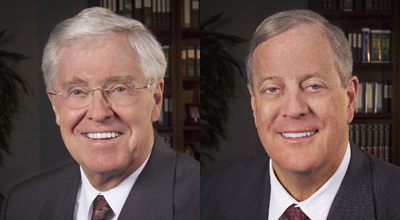 March 12, 2013- Right-wing funders and business industrialists David and Charles Koch may purchase the Tribune Company newspapers, which include the Chicago Tribune, Baltimore Sun, and the Los Angeles Times. The brothers are “interested in the clout they could gain through the Times’ editorial pages,” the Hollywood Reporter notes. Responding to the report, a spokesperson for Koch told the website that the brothers are “constantly exploring profitable opportunities in many industries and sectors”:

Our kids are being prepared for passive obedience, not creative, independent lives.

March 8, 2013- The following is Part II of the transcript of a speech Noam Chomsky delivered in February on "The Common Good." Click here to read Part I.

Let’s turn to the assault on education, one element of the general elite reaction to the civilizing effect of the ‘60s. On the right side of the political spectrum, one striking illustration is an influential memorandum written by Lewis Powell, a corporate lawyer working for the tobacco industry, later appointed to the Supreme Court by Richard Nixon. At the other end of the narrow spectrum, there was an important study by the Trilateral Commission, liberal internationalists from the three major state capitalist industrial systems: the US, Europe and Japan. Both provide good insight into why the assault targets the educational system.

March 4, 2013- Since Governor Snyder proclaimed Detroit is in a financial emergency Friday, only one name has surfaced as a possible emergency financial manager.

Could a man that last ran for president be Detroit's EFM?

"I do have a top candidate and we do have additional people that could serve that role," said Governor Snyder. "The top candidate's outstanding," he continued about the mystery person.