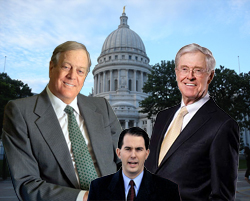 February 23, 2011- I rarely disagree with the Washington Post's top wonk Ezra Klein, but I do today. Klein is right that the most politically "lethal" thing about Wisconsin Gov. Scott Walker's 20-minute conversation with a prankster posing as right-wing moneybags David Koch is that it happened at all. But he's wrong when he says "the transcript of the conversation is unexceptional" and that "to Walker's credit, he doesn't say anything incriminating."

I think Walker's comments are hugely incriminating, maybe not legally, although the governor does seem to say yes ("That would be outstanding!") to a Koch-funded trip to California to reward his work supporting the super-rich, which could be construed as the promise of an illegal gift. But listening to Walker lay out his plans to trick Democrats into returning to Wisconsin, brag about his national popularity, compare himself to Ronald Reagan and joke about the "stereotypical blue-collar worker types" who support his union busting, I thought the conversation incriminated Walker as an enormous hypocrite: someone who pretends he's protecting state taxpayers and beleaguered private-sector employees, but is really part of a cynical fat-cat movement to pit workers against one another while insisting "it's all about gettin' our freedom back!" You really have to hear it (audio here) or read it all (transcript below) to believe it.

My favorite part is when "Koch" suggests that if Walker meets with Democrats he should "bring a baseball bat, that's what I'd do," and the governor chirps: "I have one in my office; you’d be happy with that. I have a slugger with my name on it," like he's talking to his daddy. Which makes sense, since Koch is at least Walker's political sugar daddy.

Continue reading
But the saddest part is when Walker brags that the supposedly liberal New York Times "has a great story," in which the writer interviews "every stereotypical blue-collar worker type" and finds that, just like a guy repeatedly laid off by General Motors, they all support his taking on the public workers' unions — unless, of course, they're a public worker or married to one. Oops. The Times story in question is tragic, as victims of the economy blame their troubles not on employers, but on public workers' unions. "There are a lot of people out of work right now that would take a job without a union," a bar owner in Whitewater told the Times. A woman who works at a billboard advertising company opined: "I know there was a point for unions back in the day because people were being abused. But now there’s workers' rights; there's laws that protect us." Laws that unions fought for, of course.

Part of the massive business crusade to reverse the economic gains of the '60s and '70s involved busting unions where they existed, and making it hard for workers to join them where they didn't. That's why the percentage of private sector workers who are unionized dropped from over a third of the American workforce to just 7 percent today (more than a third of public sector workers still enjoy union protection). Unions aren't perfect, and public sector unions certainly aren't. They've protected bad apples in schools and other public agencies, they can make system change harder, they've fought to hold onto generous health plans the private sector can't touch. They still have pensions, even if they're less generous, at a time when most people are lucky to have a 401K plan, let alone one that's matched. Of course the same forces that want to strip away pensions also want to cut Social Security, putting the traditional ways we've supported senior citizens at risk.

I've noted before that the dominance of public sector unions is a problem for workers, and for Democrats. Reviewing Jacob Hacker and Paul Pierson's great "Winner-Take-All Politics," I wrote last year: "The only gains for unions have come in the public sector, and that's politically problematic for Democrats, as it seems as though 'our' tax dollars pay for worker protections and benefits that the rest of us don't enjoy." Clearly Republican governors, funded by the Koch brothers and other plutocrats, have figured that out, and decided to strike workers, and Democrats, where they're vulnerable.