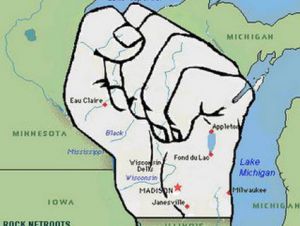 February 21, 2011- If you need to know the basics of what's going on in Wisconsin, read on. If you're already up to speed, you can follow the action on Twitter or jump straight to today's updates from our reporter on the ground in Madison.

For days, demonstrators have been pouring into the streets of Madison, Wisconsin—and the halls of the state's Capitol building—to protest rookie Republican Governor Scott Walker's anti-union proposals. Big national unions, both major political parties, the Tea Party, and Andrew Breitbart are already involved. Democratic state senators have fled the state to prevent the legislature from voting on Walker's proposals. And the protests could soon spread to other states, including Ohio.

Walker says his legislation, which would strip most state employees of any meaningful collective bargaining rights, is necessary to close the state's $137 million budget gap. There are a number of problems with that argument, though. The unions are not to blame for the deficit, and stripping unionized workers of their collective bargaining rights won't in and of itself save any money. Walker says he needs to strip the unions of their rights to close the gap. But public safety officers' unions, which have members who are more likely to support Republicans and who also tend to have the highest salaries and benefits, are exempted from the new rules. Meanwhile, a series of tax breaks and other goodies that Walker and the Republican legislature passed just after his inauguration dramatically increased the deficit that Walker now says he's trying to close. And Wisconsin has closed a much larger budget gap in the past without scrapping worker organizing rights.

What's really going on, as Kevin Drum has explained, is pure partisan warfare: Walker is trying to de-fund the unions that form the backbone of the Democratic party. The unions and the Democrats are, of course, fighting back. The Washington Post's Ezra Klein drops some knowledge [emphasis added]:

The best way to understand Walker's proposal is as a multi-part attack on the state's labor unions. In part one, their ability to bargain benefits for their members is reduced. In part two, their ability to collect dues, and thus spend money organizing members or lobbying the legislature, is undercut. And in part three, workers have to vote the union back into existence every single year. Put it all together and it looks like this: Wisconsin's unions can't deliver value to their members, they're deprived of the resources to change the rules so they can start delivering value to their members again, and because of that, their members eventually give in to employer pressure and shut the union down in one of the annual certification elections.

You may think Walker's proposal is a good idea or a bad idea. But that's what it does. And it's telling that he's exempting the unions that supported him and is trying to obscure his plan's specifics behind misleading language about what unions can still bargain for and misleading rhetoric about the state's budget.

Walker's proposals do have important fiscal elements: they roughly double health care premiums for many state employees. But the heart of the proposals, and the controversy, are the provisions that will effectively destroy public-sector unions in the Badger State. As Matt Yglesias notes, this won't destroy the Democratic party. But it will force the party to seek funding from sources other than unions, and that usually means the same rich businessmen who are the main financial backers for the Republican party. Speaking of which….

Who is Scott Walker?

Walker was elected governor in the GOP landslide of 2010, when Republicans also gained control of the Wisconsin state senate and house of representatives. His political career has been bankrolled by Charles and David Koch, the very rich, very conservative, and very anti-union oil-and-gas magnates. Koch-backed groups like Americans for Prosperity, the Cato Institute, the Competitive Enterprise Institute, and the Reason Foundation have long taken a very antagonistic view toward public-sector unions. They've used their vast fortunes to fight key Obama initiatives on health care and the environment, while writing fat checks to Republican candidates across the country. Walker's take for the 2010 election: $43,000 from the Koch Industries PAC, his second highest intake from any one donor. But that's not all!:

'Mother Jones: What’s Happening in Wisconsin Explained' have no comments